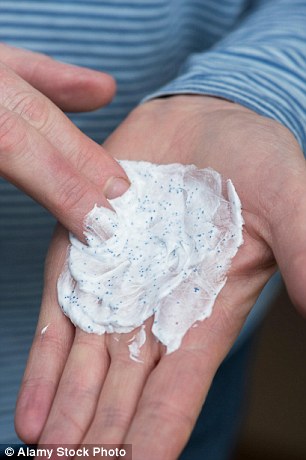 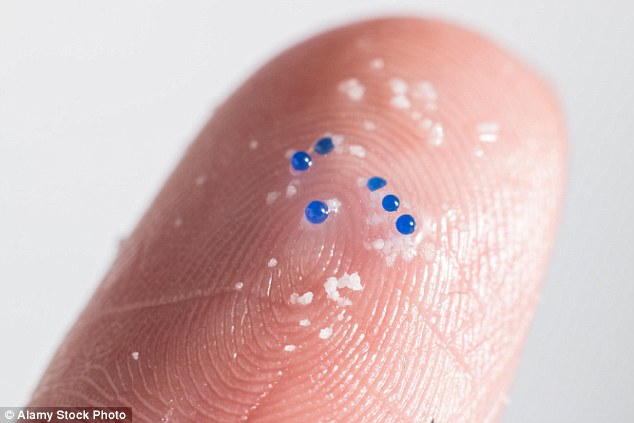 Experts concerned about microbeads and impact on the environment
Toxins in the beads, used in cosmetics, are flushed into seas after use
Fears they could enter the food chain if contaminated fish are eaten

Toxins in plastic microbeads could get into the food chain through fish and then permeate human tissues if eaten.

The frightening possibility has been identified by Government experts and environment groups.

It strengthens calls for a ban on the beads, which are contained in beauty products, face scrubs, gels and toothpaste. They end up being flushed down plug holes before reaching rivers and the sea, where they are eaten by marine life.

The Daily Mail launched its ‘Ban the Beads’ campaign amid growing evidence of the damage they cause to the environment.

A submission from experts at the Government’s food and farming department, Defra, said the evidence base is limited, but added: ‘They do not biodegrade, they accumulate in the marine environment, they can absorb toxic chemicals and pathogens, and their small size means they have the potential to be ingested by marine organisms.

‘Microplastics have been found in a wide variety of species including zooplankton, mussels, oysters, shrimp, marine worms, fish, seals and whales. Chemicals on microplastics ingested by an organism can dissociate from plastic particles and enter body tissues… This suggests that these chemicals have the potential to travel through the food chain.’

Defra said there is evidence from animal studies that small plastic particles can cross membranes into cells, causing damage and inflammation.

Looking at the implications for humans, Defra said: ‘Several studies show that microplastics are present in seafood sold for human consumption, including mussels in North Sea mussel farms and oysters from the Atlantic.

‘The presence of marine microplastics in seafood could pose a threat to food safety. However, due to the complexity of estimating toxicity, estimations of the potential risks for human health posed by microplastics in foodstuffs is not yet possible.’

the UK’s Centre for Environment Fisheries and Aquaculture Science, said there is good evidence from medicine that microplastics can penetrate human tissue.

‘There is a whole set of evidence already of the impacts of microplastics on the human body, which comes from the medical side of science,’ he said. ‘They use them as vectors for delivering medicines to those areas where they want them to be active.

‘It could transfer to several layers of the human body, in simple layman’s terms.’

It is known that, once in the sea, the microbeads effectively become a magnet for toxic pollutants, including industrial chemicals and pesticides
They are mixed among the plankton and are ingested by marine life. One British study found that more than one in three fish, including cod, haddock and mackerel, caught off the British coast are contaminated with the beads.

The real concern is that the plastic and the toxins absorbed by the beads are ending up on dinner plates and causing harm to the human population.

The EAC has called on the Government to implement a unilateral ban on plastic microbeads.

Its chairman, Labour MP Mary Creagh, said: ‘The alarming possibility that microplastics could be carrying toxins into our bodies through eating fish or shellfish highlights the need for far more research in this area.

‘In the meantime, the Government should speed up the ban on these plastic pollutants.’

Louise Edge, senior oceans campaigner at Greenpeace, said: ‘What we are looking at here is the frightening possibility that these tiny microplastics in our seafood could move from our guts into cells and tissue elsewhere in our body, increasing the risk of exposure to toxic chemicals.

‘We simply don’t know enough about these potential health risks. What we can be sure of, however, is that people didn’t order plastic with their fish and chips – and that a ban on any product which could send microplastics down into our seas is a crucial step in stamping out this danger.’

The Mail revealed yesterday that all the major supermarkets are removing microbeads from their own-range products, with many also no longer selling branded products that contain the plastics.