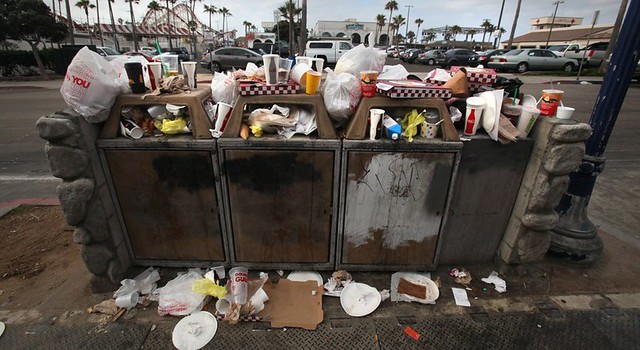 Trash, including plenty of plastic bags, overflows from bins at Belmont Park in Mission Beach on July 5. — Peggy Peattie

The San Diego City Council on Tuesday voted 6-3 to ban single-use plastic bags at large grocery stores, pharmacies and corner markets — becoming one of the last major cities in California to limit the disposable products.

“Citizen across the state have demonstrated the ability to transition to more sustainable, reusable bags, and I’m confident that the citizens of San Diego will quickly adopt this beneficial practice,” City Council President Sherri Lightner said during the council’s afternoon meeting.

“I strongly believe that now is the time to demonstrate local leadership on this issue and make a clear statement that we value our environment,” she added.

Mayor Kevin Faulconer said he plans to sign the ordinance, which would make San Diego the 150th municipality in California with a ban on plastic checkout bags, which often end up in landfills or as litter in storm drains, rivers, canyons and beaches.

“All this trash, all this litter was put there by somebody or carelessly left behind because they were too lazy to haul this stuff home,” Sherman said at the meeting. “We need to start dealing with those laws that are on the books, the littering, the dumping, and making those fines and those penalties so people think twice.”

A second reading of the ordinance is expected within a few weeks. Once finalized, the rules would give large food stores about six months to comply and approximately a year for smaller drug and convenience stores.

The proposed ban drew wide support from the audience in council chambers Tuesday, which included advocacy organizations such as the Surfrider Foundation’s San Diego County chapter and San Diego Coastkeeper to business-minded groups such as the San Diego Regional Chamber of Commerce and the Equinox Project.

“The vast majority of plastic bags we see are entangled in the brushes next to our rivers and streams,” said Kristin Kuhn, community engagement manager for Coastkeeper. “After every rain event, these bags clog and choke our city’s already damaged waterways.”

The stated goal of the new ordinance is to encourage shoppers to bring their own reusable sacks in order to decrease the roughly 700 million plastic checkout bags distributed locally every year. Only 3 percent of those bags are recycled, according to the city.

Like most plastic-bag bans in the state, San Diego’s policy requires grocery stores and other food retailers to charge at least 10 cents for each paper bag or for a sturdier reusable bag, which often costs considerably more.

“Stakeholders have worked tirelessly with local jurisdictions throughout the state to find a solution that makes sense for both the environment and businesses,” Sophie Barnhorst, policy coordinator for the chamber of commerce, said at the council meeting. “A ban on plastic and a charge for paper has the potential to achieve maximal environment gain with minimal business disruption.”

The city’s policy comes a few months ahead of a referendum vote in this fall’s general election on whether to uphold a statewide prohibition on single-use checkout bags.

After California in 2014 passed the nation’s only statewide ban on such products, the plastics industry launched a signature drive to overturn the law, criticizing it as a tax on shoppers and an ineffective way to fight pollution.

The American Progressive Bag Alliance has raised more than $6.4 million — funded largely by out-of-state bag manufacturers — to overturn the statewide ban in November. If that ban is voided, the municipal ones — including San Diego’s — would remain in place.

“Like other local bag ordinances in California, this law will do nothing to benefit the environment or residents while letting grocers make millions annually in new bag fees,” said Lee Califf, executive director of the bag alliance.

Bag manufacturers also have spearheaded another ballot measure this fall that would require stores to redirect money from bag sales to a fund administered by the Wildlife Conservation Board. The bag fees are estimated to bring in tens of millions of dollars annually, according to the Independent Legislative Analyst’s Office.

“While San Diego residents should have been given the opportunity to vote to repeal the bag ban, they will still be able to vote in November to allow their local government to redirect bag fees to the environment,” Califf said.

Supporters of eliminating single-use plastic bags see the San Diego council’s vote as a boon for the campaign to uphold the statewide ban.

“Polling has shown that people already living under a ban are more likely to support the statewide effort because they realize that it’s not that big of a deal,” said Genevieve Abedon, waste prevention campaign coordinator with Californians Against Waste, which is part of a coalition that has raised about $1.6 million to defeat the overturn referendum.

San Diego officials said based on statistics from the county of Los Angeles, which adopted its ban in 2010, customers will eventually bring their own reusable bags for about 65 percent of purchases at grocery stores and other retailers — eliminating about 95 percent of all single-use plastic bags distributed in the city.

San Diego stores subject to the new ordinance could be forced to pay up to $2,500 for each day they’re not in compliance. In addition, they would have to track for three years the number of paper bags they provide to customers each month and provide that data to the city upon request.

In anticipation of the ordinance, San Diego has distributed about 40,000 reusable shopping bags, focusing on low-income neighborhoods, food banks, schools and libraries, according to city officials.

San Diego’s ban requires that paper bags be provided for free to customers who are receiving government food assistance, including through the California Special Supplemental Food Program for Women, Infants and Children.

In this region, Solana Beach, Encinitas and Del Mar had passed similar bans. Oceanside is poised to vote on such a measure as early as next month.

About 40 percent of Californians now live in areas with some type of restriction on plastic bags, including Long Beach, San Jose, Sacramento and Oakland, as well as San Francisco, the city that led the push against single-use bags in 2007.

Last year, Huntington Beach became the only city in the state so far to repeal a plastic-bag ban — after its elected leaders and many residents expressed concerns over government overreach.