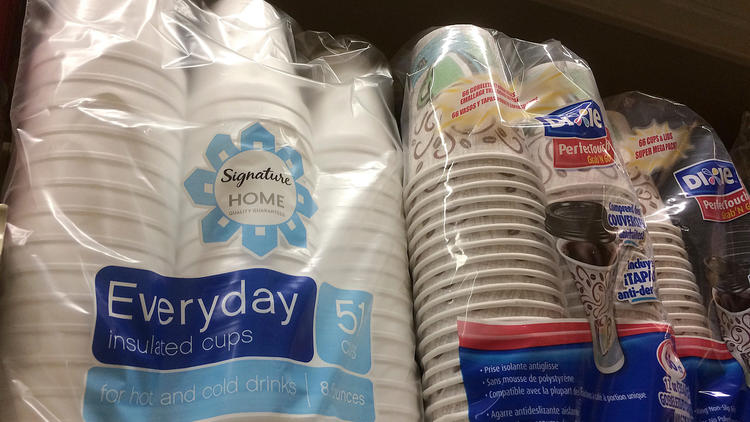 Consumers in San Francisco will no longer be able to purchase foam cups and other polystyrene products. (Jeff Chiu / Associated Press)

Polystyrene is killing our coasts. California needs to turn off the trash tap on foam takeout containers

San Francisco county supervisors recently adopted the nation’s strictest ban on polystyrene foam, prohibiting its use in takeout containers and shipping materials and barring the sale of foam retail products. No more packing peanuts or cheap picnic coolers for sale in the City by the Bay.

The new law is entirely in step with San Francisco’s uber-progressive and sometimes unusual policies, but it’s extreme. By contrast, the other 90 or so California cities and counties that have adopted polystyrene bans in the last decade have appropriately focused on the most troublesome form of the plastic foam: single-use takeout food and beverage containers. After cigarette butts and scrap pieces of hard plastic, soft polystyrene foam — known popularly, if incorrectly, as Styrofoam — is the third most-common source of trash washing up on local beaches, according to Heal the Bay. Not surprising, given that Americans discard 2.5 billion foam cups every year and rarely recycle their used polystyrene takeout containers.

But it’s the stuff that doesn’t wash up on the beach, and remains in the water, that causes the biggest environmental concern. Polystyrene foam doesn’t biodegrade like organic material. Instead, it breaks down into small pellets that are hard to clean up — and are nicely bite-sized for fish and fowl. That’s not just icky; it’s potentially poisonous for marine creatures and the humans who eat them. Polystyrene absorbs toxins in the water, such as DDT, a carcinogenic pesticide still in use outside the United States, and PCBs, which are also suspected carcinogens.

Polystyrene pollution is a real problem that is getting worse, despite intense recycling and trash-reduction efforts. The Great Pacific Garbage Patch keeps growing, fed by a steady stream of disposable-plastic waste. One report by the World Economic Forum warns that if plastics continue to be dumped into the ocean at their current rate, there will be more plastic than fish in the oceans by 2050.

It’s time for the state to turn off the trash tap. That effort has been underway at the local level for the last decade; Santa Monica, Hermosa Beach, Manhattan Beach and other coastal cities have passed laws prohibiting food service businesses from using to-go containers made of polystyrene foam. The Pasadena City Council on Tuesday voted to do the same, and Culver City, which sits along the storm drain-fed Ballona Creek, is considering a ban of its own. The city and county of Los Angeles and Los Angeles Unified School District have prohibited the use of polystyrene in their facilities and schools. And more cities and counties may be inspired by San Francisco’s bold action to adopt their own version of a ban.

“In some ways, polystyrene foam is worse than single-use plastic bags.”

San Francisco’s rule may not be the best model, at least at the moment, because of its scope. Foam packing material is not as likely to be tossed in the street, and in some cases, there is no reasonable substitute. In addition, polystyrene is 98% air and so lightweight that replacing it with cardboard or other packing material could raise shipping weights. If more fuel is required to transport the same goods, that would increase greenhouse gas emissions. Simply swapping one environmental ill for another is no solution.

Regardless, the spread of local restrictions on polystyrene use is fast becoming a nightmare for businesses, such as food trucks or chain restaurants, that operate in more than one California city. And that’s a good thing, because it may take a critical mass of cities adopting different versions of plastic foam bans to generate a comprehensive statewide ban. It wasn’t until local governments created a messy patchwork of plastic-bag ordinances that the Legislature found the courage to take on the powerful plastic bag lobby and ban single-use plastic bags throughout California.

At the moment the top priority for environmentalists is getting voters to support a ballot measure to ratify the ban on single-use plastic bags. (The anti-trash measure that lawmakers adopted nearly two years ago was put on hold until a ballot challenge by plastic bag makers is voted on in November.) After that, they should prepare for the next big trash fight.

It won’t be easy. The polystyrene lobby and business groups will fight hard to try to stop such a ban, as they did unsuccessfully in San Francisco. They will argue that the bigger problem is litter and that the real solution is doing a better job of recycling foam, or maybe even finding a way to turn plastic trash into energy. If the industry can get those things going soon, more power to them. For now, however, we need to stop the flow of polystyrene foam trash into the ocean.

In some ways, polystyrene foam is worse than single-use plastic bags. Both are recyclable, but about three times as many single-use plastic bags are diverted from the landfill in California than the approximately 1% of plastic foam that is recycled. Many cities do not accept polystyrene when collecting recyclables at the curb. (Los Angeles does, so long as it is clean.)