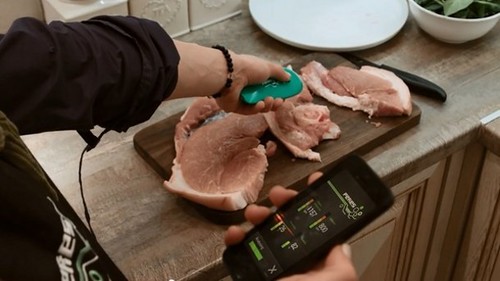 PERES, a portable app-based device, tests meat and poultry for freshness, sounding an alert when spoilage is detected.

The PERES system, produced by ARS Lab, analyzes airborne data to check beef, poultry, pork, and fish for freshness. The user gets feedback instantly via the system’s mobile app.

“Foodborne illness doesn’t discriminate based on wealth or social status,” says Alesiunas. “Anyone, at anytime, can get sick; PERES will help reduce the chances of contracting a foodborne illness and, in turn, significantly lower the mortality rate.”

In addition to checking for spoilage, the PERES sensor (which can be used either in professional food environments, or by home users) can be used by consumers to determine if meat is fresh or past the point of safe consumption.

PERES uses four different sensors to determine whether or not food has gone bad. One detects volatile organic compounds (VOCs), another gauges ammonia levels, another checks temperature, and one measures humidity levels. The device reads and analyzes the data gathered by the sensors before transmitting it via Bluetooth to the user’s smartphone or tablet where it can be viewed on the PERES app.

The system can generate graphs and charts, which provide visual representation of the data accrued. Users can draw upon the graphs and reports to determine whether or not the food in question is safe or should be discarded.

PERES attained its initial capital funding through Indiegogo, a crowdsourcing platform; to date, it has exceeded its initial goal of $50,000 by approximately $20,000. Alesiunas told FPD the early attention the PERES system has received is indicative of the need for portable, easy-to-use food safety tests.

“We knew we were creating something the public both wanted and needed,” he said. “To have those feelings validated by our backers’ support is indescribable.”