The United Nations recently released population projections based on data until 2012 and a Bayesian probabilistic methodology. Analysis of these data reveals that, contrary to previous literature, world population is unlikely to stop growing this century. There is an 80% probability that world population, now 7.2 billion, will increase to between 9.6 and 12.3 billion in 2100. This uncertainty is much smaller than the range from the traditional UN high and low variants. Much of the increase is expected to happen in Africa, in part due to higher fertility and a recent slowdown in the pace of fertility decline. Also, the ratio of working age people to older people is likely to decline substantially in all countries, even those that currently have young populations.

The United Nations (UN) is the leading agency that projects world population into the future on a regular basis (1). Every two years it publishes revised data of the populations of all countries by age and sex, as well as fertility, mortality and migration rates, in a biennial publication called the World Population Prospects (WPP) (2). In July 2014, probabilistic projections for individual countries to 2100 were released Unlike previous projections, they allow us to quantify our confidence in projected future trends using established methods of statistical inference. They are based on recent data, including the results of the 2010 round of censuses and recent surveys until 2012, as well as the most recent data on incidence, prevalence and treatment for the countries most affected by the HIV/AIDS epidemic (3), which had not been included previously.

Traditionally, the UN has also provided high and low projection scenarios (shown in Fig. 1A), obtained by adding or subtracting half a child from the total fertility rate (TFR, in children per woman) on which the main (or medium) projection is based, for each country and all future time periods. These scenarios have been criticized as having no probabilistic basis and leading to inconsistencies (4, 5). For example, while it is plausible that fertility could exceed the main projection by half a child in a given country and year, it is unlikely that this would be the case for all countries and all years in the future, as assumed in the high projection.

In a methodological innovation aimed at overcoming this limitation, we derived new probabilistic projections based on probabilistic Bayesian hierarchical models for major components of demographic change, namely fertility (6–8) and life expectancy (9, 10). These models incorporated available data and take advantage of data from other countries when making projections for a given country. They also incorporated external information through Bayesian prior distributions, including an upper bound of 1.3 years per decade on the asymptotic rate of increase of life expectancy, based on historic data on life expectancy in leading countries (11) and on changes in the maximum age at death (12). They included the assumption that the total fertility rate for a country will ultimately fluctuate around a country-specific long-term average which is estimated from the data; these long-term averages are between 1.5 and 2 children per woman for most countries with high probability (7).

The increase in the projected population of Africa is due to persistent high levels of fertility, and the recent slowdown in the rate of fertility decline (16). Three-quarters of this anticipated growth is attributable to fertility levels above replacement level, and a quarter to mortality reduction and current youthful age structure (17). Since 1950, fertility has declined rapidly in Asia and Latin America, and has also started to decline in Africa. Demographers had projected that fertility in African countries would decline at a rate similar to what has been observed in Asia and Latin America.

However, while fertility has been declining in Africa over the past decade, it has been doing so at only about one-quarter of the rate at which it did in Asia and Latin America in the 1970s, when they were at a comparable stage of the fertility transition (16). Indeed, in some African countries, the decline seems to have stalled (18).

Bongaarts and Casterline (16) suggest two reasons for the slower fertility decline in Sub-Saharan Africa. First, they note that despite declines in fertility desires in Africa, the most recent levels of ideal family size are still high, with a median of 4.6 children per woman. This is in line with prevailing family norms (19), and the fact that total fertility before fertility started to decline was higher in Africa (6.5) than in the other regions (5.8) (20, 21). Second, the unmet need for contraception (the difference between the demand for contraception and its use) has remained substantial at about 25%, with no systematic decline over the past 20 years (22).

A stall in the decline in the past decade is apparent from the past and projected levels of TFR for Nigeria, the most populous country in Africa (Fig. 2A). The UN’s projection continues to project a decline, but the uncertainty bands are wide, indicating that the stall could continue for a considerable time. This continued high fertility for total population: would result in a projected increase of more than five-fold by 2100, from the current 160 to 914 million (Fig. 2B). There is considerable uncertainty about this, but there is still a 90% probability that Nigeria’s population in 2100 will exceed 532 million, a more than three-fold increase.

We also indicate the likely level of population aging in different countries. One measure of this is the Potential Support Ratio (PSR), equal to the number of people aged 20-64 divided by the number of people 65 and over (Fig. 3). This can be viewed very roughly as reflecting the number of workers per retiree. Currently, the country with the lowest PSR is Japan, with 2.6. 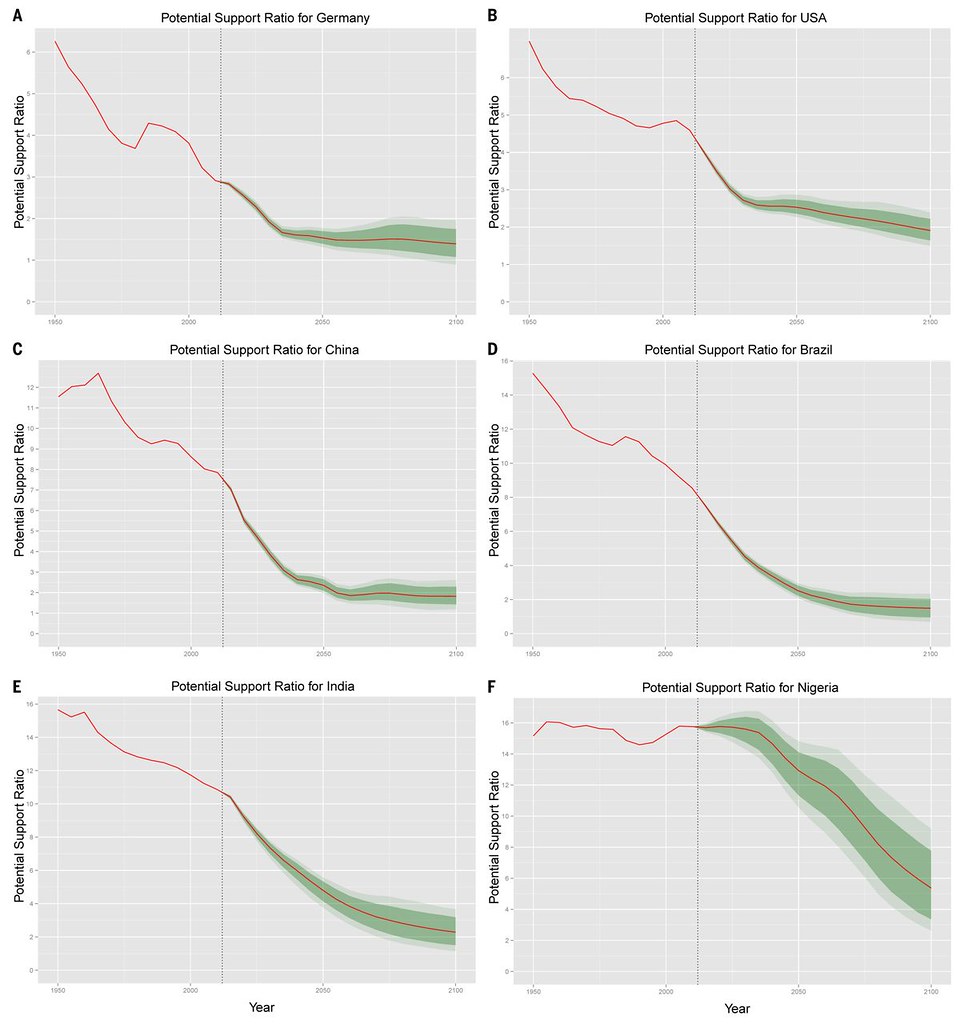 Among the most robust empirical findings in the literature on fertility transitions are that higher contraceptive use and higher female education are associated with faster fertility decline (25). These suggest that the projected rapid population growth could be moderated by greater investments in family planning programs to satisfy the unmet need for contraception (26, 27), and in girls’ education. It should be noted, however, that the UN projections are based on an implicit assumption of a continuation of existing policies, but an intensification of current investments would be required for faster changes to occur. It should also be noted that the projections do not take into account potential negative feedback from the environmental consequences of rapid population growth. The addition of several billion people in Africa could lead to severe resource shortages which in turn could affect population size through unexpected mortality, migration or fertility effects.

The implications are not all negative, however. Rapid fertility decline brings with it the prospect of a potential long-lasting demographic dividend in countries that currently have high fertility, such as Nigeria; see Fig. 3. Figure 3 also suggests that developing countries with young populations but lower fertility (e.g., China, Brazil and India) are likely to face the problems of aging societies before the end of the century. This suggests that they need to invest some of the benefits from their demographic dividends in coming decades in provision for future seniors, such as social security, pension and senior health care funds.

18. United Nations, Population Facts No. 2013/10, December 2013 – Explaining Differences in the Projected Populations Between the 2012 and 2010 Revisions of World Population Prospects: The Role of Fertility in Africa (Population Division, Dept. of Economic and Social Affairs, United Nations, New York, 2013).

19. T. A. Moultrie, I. M. Timaeus, Rethinking African fertility: The state in, and of, the future sub-Saharan African fertility decline, paper presented at the Annual Meeting of the Population Association of America (2014);

28. Acknowledgments: We thank all the team involved in the production of the 2012 Revision of the World Population Prospects, and in particular K. Andreev and F. Pelletier. We also thank two anonymous reviewers for helpful comments. Supported by NIH grants R01 HD054511 and R01 HD070936. Raftery’s research was also supported by a Science Foundation Ireland ETS Walton visitor award, grant reference 11/W.1/I2079. Views expressed in this article are those of the authors and do not necessarily reflect those of NIH or the United Nations.