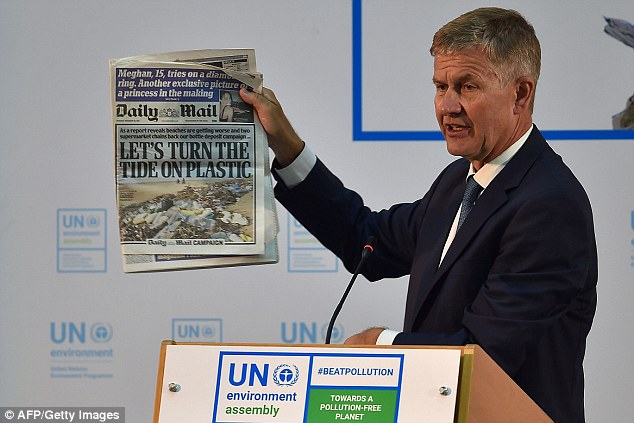 The head of UN Environment Erik Solheim, pictured, has called on people to pay attention to science and accept the health risks of plastic

Erik Solheim, head of UN Environment, has called for action on plastic pandemic

Michael Gove, Environment secretary, said that he is determined to tackle issue

Tiny particles of plastic are present in the air, contaminating the food we eat and the air we breathe, this newspaper revealed yesterday.

Fish fillet samples from eight stores were tested and all revealed worrying levels of plastic exposure.

Scientists behind the research said this was evidence that microplastics are all around us. It is the latest damning indictment of modern society’s reliance on plastic when its damaging effects are still unknown.

The Mail’s research follows ten years of campaigning against plastic, which was praised by the UN last year.

Yesterday Erik Solheim, head of UN Environment, said: ‘This Daily Mail investigation is yet more shocking but important evidence of the global scale of plastic pollution.

‘It’s high time for people to pay attention to the science and accept that we simply cannot afford to continue with this carefree attitude to polluting our water and the air we breathe. We still don’t know nearly enough about the potential health risks of plastics pollution, although this is fast becoming an area of high priority research because of the sheer scale of the problem. Still, common sense dictates that inaction is not an option.’

Last night Environment Secretary Michael Gove said: ‘The findings of the Mail’s investigation are deeply disturbing. I will be examining them very carefully. I remain determined to tackle plastic pollution.’

Environment minister Therese Coffey added: ‘While the basis and conclusions of this study need to be considered more in detail, we are clear we need to protect our precious planet from the scourge of plastic waste and honouring our pledge to leave our natural world in a better state than we inherited it across land, sea and air.

‘That is why we are driving global action and leading by example including introducing one of the world’s toughest bans on plastic microbeads and taking nine billion plastic bags out of circulation with our 5p carrier bag charge.’ 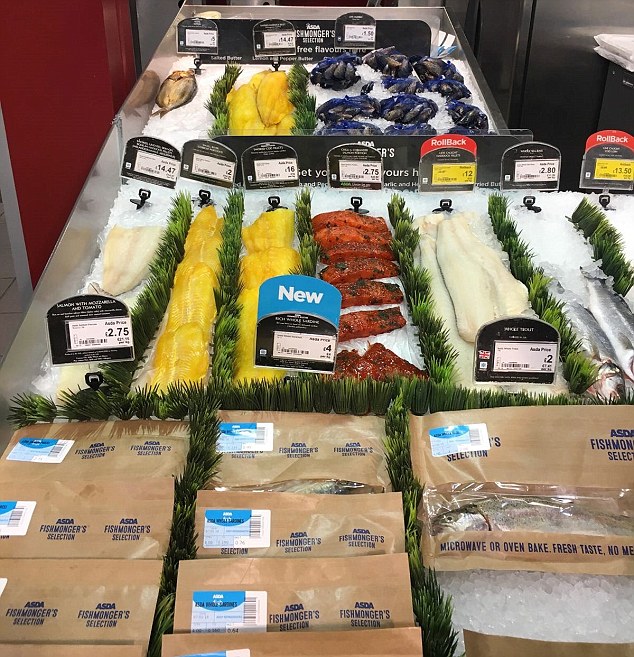 The UN, pressure groups and the government have pledged to take action to tackle the plastic pandemic following a Daily Mail investigation

Experts warn ingesting plastic particles can affect lungs, kidneys and hormones. They can even travel from the intestines to a mother-to-be’s placenta.

Tory MP Neil Parish, chairman of the environment, food and rural affairs committee, said it was ‘deeply concerning’ that airborne microplastics may pose a risk to public health.

‘The latest revelations underscore the importance of joining up action across sectors and Government departments,’ he said. ‘There is an urgent need for further studies on the prevalence and health impacts of airborne microplastics.’

Labour MP Mary Creagh, chairman of the environmental audit committee, said: ‘These worrying findings by the Daily Mail show the urgent need to act. It is not enough for ministers to give up plastics for Lent, we need policy not piety to turn back the plastic tide.’

A potential health effect of ingesting microplastics is lung damage as tiny particles can lodge deep inside them without disintegrating for weeks.

Alison Cook, director of policy at the British Lung Foundation, called for ‘an ambitious Clean Air Act without delay’. She added: ‘The Mail has revealed the potential threat of microplastics in the air.’

Julian Kirby, for Friends of the Earth, said ‘a phase-out of all but the safest, most essential plastics’ was needed to stop the particles getting into waterways and the air. Apolline Roger, of green lawyers Client Earth, said: ‘Single-use and unnecessary plastics need to be banned.’

The particles found in the Mail’s research were 0.25mm to 1mm long and mainly fibres from textiles used in clothing, carpets or furniture.

Most of our food ‘is contaminated’

Most of the food we eat and drink is likely to be contaminated with microplastics, leading scientists warned last night.

Dr Andrew Mayes, of the University of East Anglia, said: ‘It shouldn’t be a surprise to people that everything they eat, drink, touch, is contaminated with tiny particles.’

Plastic had been seen as a ‘wonderful new product’ but only after years of extensive use ‘did it begin to dawn on people that it was the tip of an environmental disaster iceberg’, he added.

Dr Natalie Welden, who led the Mail’s research, said although airborne microplastics have been shown to affect items displayed on counters, processed food could be even more at risk. Each stage of the production process could lead to the fragments being trapped in the food, she added.

‘Generally it’s going to be something that, whether at the supermarket or in your home, it’s something that’s very difficult to control,’ said Dr Welden.

He said this was ‘just the start’, adding: ‘If we look at other food and drink sources, I would expect to find similar results. We don’t know what we’ve done to ourselves.’