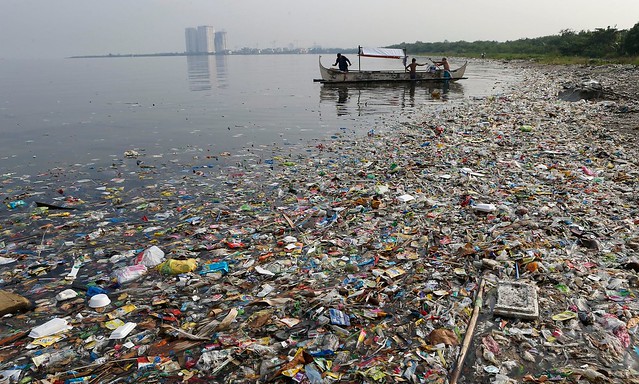 From supermarket bags to CDs, man-made waste has contaminated the entire globe, and become a marker of a new geological epoch

Humans have made enough plastic since the second world war to coat the Earth entirely in clingfilm, an international study has revealed. This ability to plaster the planet in plastic is alarming, say scientists – for it confirms that human activities are now having a pernicious impact on our world.

The research, published in the journal Anthropocene, shows that no part of the planet is free of the scourge of plastic waste. Everywhere is polluted with the remains of water containers, supermarket bags, polystyrene lumps, compact discs, cigarette filter tips, nylons and other plastics. Some are in the form of microscopic grains, others in lumps. The impact is often highly damaging.

“The results came as a real surprise,” said the study’s lead author, Professor Jan Zalasiewicz, of Leicester University. “We were aware that humans have been making increasing amounts of different kinds of plastic – from Bakelite to polyethylene bags to PVC – over the last 70 years, but we had no idea how far it had travelled round the planet. It turns out not just to have floated across the oceans, but has sunk to the deepest parts of the sea floor. This is not a sign that our planet is in a healthy condition either.”

The crucial point about the study’s findings is that the appearance of plastic should now be considered as a marker for a new epoch. Zalasiewicz is the chairman of a group of geologists assessing whether or not humanity’s activities have tipped the planet into a new geological epoch, called the Anthropocene, which ended the Holocene that began around 12,000 years ago.

Most members of Zalasiewicz’s committee believe the Anthropocene has begun and this month published a paper in Science in which they argued that several postwar human activities show our species is altering geology. In particular, radioactive isotopes released by atom bombs left a powerful signal in the ground that will tell future civilisations that something strange was going on.

In addition, increasing carbon dioxide in the oceans, the massive manufacture of concrete and the widespread use of aluminium were also highlighted as factors that indicate the birth of the Anthropocene. Lesser environmental impacts, including the rising use of plastics, were also mentioned in passing.

But Zalasiewicz argues that the humble plastic bag and plastic drink container play a far greater role in changing the planet than has been realised. “Just consider the fish in the sea,” he said. “A vast proportion of them now have plastic in them. They think it is food and eat it, just as seabirds feed plastic to their chicks. Then some of it is released as excrement and ends up sinking on to the seabed. The planet is slowly being covered in plastic.” In total, more than 300 million tonnes of plastic is manufactured every year, states the paper, The Geological Cycle of Plastics and Their Use as a Stratigraphic Indicator of the Anthropocene.

“In 1950, we virtually made none at all. It is an incredible rise,” added Zalasiewicz. “That annual total of 300 million tonnes is close to the weight of the entire human population of the planet. And the figure for plastic manufacture is only going to grow. The total amount of plastic produced since the second world war is around 5 billion tonnes and is very likely to reach 30 billion by the end of the century. The impact will be colossal.”

As the paper makes clear, plastic is already on the ocean floor, remote islands, buried underground in landfill sites and in the food chain. Even the polar regions, generally considered still to be pristine zones, are becoming affected. In 2014, researchers found “significant” amounts of plastic granules frozen in the Arctic Sea, having been swept there from the Pacific Ocean.

In some cases, wildlife adapts to the spread of plastic. For example, on islands such as Diego Garcia, hermit crabs have taken to using plastic bottles as homes. However, most of the impact on wildlife is harmful. Creatures ranging from seabirds to turtles become entangled in plastic and drown or choke to death. “The trouble is that plastic is very slow to degrade, so we are going to be stuck with this problem for a long time,” said Zalasiewicz.