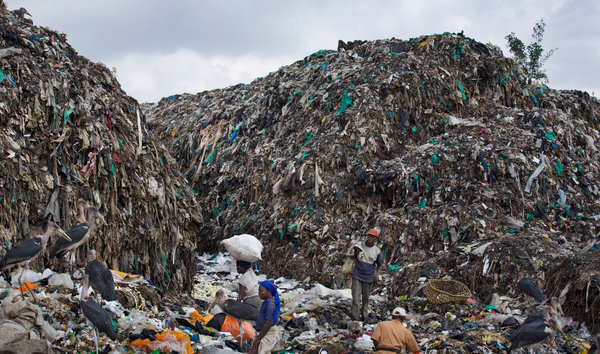 Shoppers in Kenya use an estimated 100 million plastic bags a year, many of which wind up in landfills like this one in Nairobi. BEN CURTIS / ASSOCIATED PRESS

The new rule, announced in March and put into effect on Monday, also means that garbage bags will be taken off supermarket shelves and visitors entering Kenya will be required to leave their duty-free shopping bags at the airport.

Kenya joins more than 40 other countries including China, the Netherlands and France that have introduced taxes on bags or limited or prohibited their use.

Kenyan shoppers are thought to use 100 million plastic bags a year, according to the United Nations, and the new rules created some worries in the capital, Nairobi, when they were announced.

Fruit and vegetable sellers were at a loss for how to market their produce, and some residents mistook ordinary traffic controllers for law enforcement officials looking to punish consumers who violated the new law. In informal settlements, where most of the city’s residents live, plastic bags are used as “flying toilets” — holding human waste in the absence of a proper sewage system.

Judy Wakhungu, Kenya’s environment minister, tried to allay people’s fears, telling Reuters that the ban was primarily aimed at manufacturers and suppliers. “Ordinary wananchi will not be harmed,” she said, using a Kiswahili word for “common person.”

The new regulations call for a fine of $19,000 to $38,000 or a four-year jail term for those manufacturing or importing plastic bags in Kenya. Plastics used in primary industrial packaging are exempt, according to the National Environment Management Authority, although it said that the new regulation would prohibit retailers from selling garbage bags.

Kenyans have had several months to adjust to the idea of the new rules, a period during which big supermarket chains like Nakumatt and the French multinational retail giant Carrefour began offering cloth bags instead of plastic. The country’s High Court last week rejected a case filed by two plastic bag importers to drop the ban, saying that protecting the environment was more important than the companies’ commercial interests.

Before the ban went into effect, Chege Kariuki, the chairman of the Waste and Environment Management Association of Kenya, said that garbage collectors would be unable to operate without plastic bin liners. “Waste management in Nairobi will become impossible for all waste companies,” he told The Star, a Kenyan newspaper.

Samuel Matonda, a spokesman for the Kenya Association of Manufacturers, said the new regulation could cost up to 60,000 jobs. “The knock-on effects will be very severe,” Mr. Matonda told The Standard newspaper. “It will even affect the women who sell vegetables in the market — how will their customers carry their shopping home?”

In lieu of plastic, the Kenyan government has encouraged people to tote reusable alternatives, including bags made of paper, cloth and sisal, a plant with stiff leaves.

Worldwide, plastic bags contribute to eight million tons of plastic that leak into the ocean every year, according to the United Nations Environment Program. “At current rates, by 2050, there will be more plastic in the oceans than fish, wreaking havoc on marine fisheries, wildlife and tourism,” the program said in a statement when Kenya’s ban was announced in March.

Plastic bags can take hundreds of years to degrade, and polyethylene bags can strangle sea turtles and fill the stomachs of whales and dolphins until they die of starvation. In Kenya, livestock often graze on garbage, and bags are found in the stomachs of cows when they are slaughtered, according to the United Nations Environment Program.

“We urge all Kenyans to know the importance of preserving the environment,” she said.