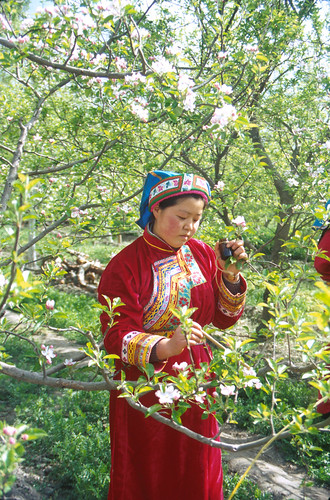 In the last 50 years, the global human population has nearly doubled, while the average calories consumed per person has increased by about 30%.

To cope with the ever growing demand for food, more land has been brought into agricultural production, mainly by clearing forests, and farming has become much more intensive. Fertilisers, pesticides, and development of new plant varieties have allowed farmers to increase the average yield of food per hectare to increase by 130% in the same period.

It is obvious that this pattern cannot go on for ever; we will run out of forests to clear, and we cannot squeeze ever more food from the same area of land. There are cracks beginning to show; highly intensive farming may not be sustainable in the long term.

Globally, about 75 billion tons of soil is lost every year, washed away or blown out to sea after ploughing. Three hundred and twenty million hectares of land have been affected by a build up of salt due to irrigation practices. Roughly 40% of all agricultural land is now degraded in one way or another.

The role of bees and pollinators

Farming and human health depend upon the ecosystem services provided by wild organisms; worms, woodlice, millipedes and a host of other creatures which help with soil formation, forests to produce oxygen, prevent soil erosion and regulate water flow, birds to eat insect pests, flies and beetles to break down animal dung, bees and other pollinators to pollinate crops.

Modern farming threatens to eradicate these organism, and so undermine itself.

Pollination provides one of the clearest examples of how our disregard for the health of the environment threatens our own survival. About 75% of all crop species require pollination by animals of some sort, often by bees, but sometimes by flies, butterflies, birds or even bats.

Crop pollination by insects has been estimated to be worth $14.6 billion to the economy of the USA and £440 million a year to the UK. Some pollination is done by domesticated honeybees, but the bulk of pollination of most crops is done by wild insects, including many species of wild bee such as bumblebees.

In the UK, for example, recent studies suggest that about one-third of pollination is delivered by honeybees, the rest being carried out by a range of wild insects. These animals need undisturbed places to nest, and flowers to feed on when the crops are not flowering.

However, bee diversity has declined markedly in Europe, with many species disappearing from much of their former range, and some species going extinct. The UK alone has lost three species of native bumblebee, and six more are listed as endangered. Four bumblebee species have gone extinct from the whole of Europe, and there is good evidence for similar declines in North America and China.

Pollinating animals fly in to our fields to pollinate crops from surrounding wild areas, but if there are no wild areas, or if the crops are doused in insecticides, then pollination will suffer and yields will decline.

Evidence from around the world points to falling and increasingly unpredictable yields of insect-pollinated crops, particularly in the areas with the most intensive farming. Where crops are grown in vast fields, there are not enough insects to go around. If insecticides are sprayed too frequently, then vital pollinators cannot survive.

The most dramatic example comes from the apple and pear orchards of south west China, where wild bees have been eradicated by excessive pesticide use and a lack of natural habitat.

In recent years, farmers have been forced to hand-pollinate their trees, carrying pots of pollen and paintbrushes with which to individually pollinate every flower, and using their children to climb up to the highest blossoms. This is clearly just possible for this high-value crop, but there are not enough humans in the world to pollinate all of our crops by hand.

There are simple solutions; studies in Europe and North America have found that planting strips of wildflowers on farms, and leaving patches of natural vegetation such as forests, can greatly boost pollinator populations. These practices can also increase populations of natural predators, decreasing the need for pesticide sprays.

With a little effort it is perfectly possible to grow food and look after the environment. In fact, taking a long term view, this is probably the only way to grow food, for otherwise there is a danger that farming will collapse.

Without bees, our diets would be depressingly poor. We would be forced to survive on wind-pollinated crops; wheat, barley and corn, and little else. Imagine shops without raspberries, apples, strawberries, peas, beans, courgettes, melons, tomatoes, blueberries, pumpkins and much more.

Bees and other insects have provided free pollination for our crops for millennia. They will continue to do so if we learn to recognise their importance and return the favour by providing them with what they need to survive.

We need to recognise that the health and wellbeing of our children depends upon us preserving a healthy environment, and that to do so requires that we show some respect for the myriad of wild animals and plants with which we share the world.

Dave Goulson, professor of biological science at Stirling University in the UK