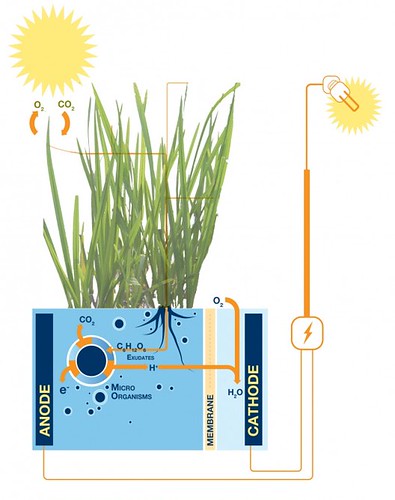 Wetlands are estimated to account for around six percent of the earth’s surface and a new Plant-Microbial Fuel Cell technology developed at Wageningen University & Research in The Netherlands could see some of these areas become a viable source of renewable energy. More than that, the developers believe that their technology could be used to supply electricity to remote communities and in green roofs to supply electricity to households.

Unlike biogas, which is produced by the anaerobic digestion or fermentation of biomass, the Plant-Microbial Fuel Cell generates electricity while the plants continue to grow. Importantly, the researchers say the system doesn’t affect the plant’s growth of harm its environment.

It works by taking advantage of the up to 70 percent of organic material produced via photosynthesis that can’t be used by the plant and is excreted through the roots. As naturally occurring bacteria around the roots break down this organic residue, electrons are released as a waste product. By placing an electrode close to the bacteria to absorb these electrons, the Wageningen UR research team, led by Marjolein Helder, was able to generate electricity.

Although the Plant-Microbial Fuel Cell currently only generates 0.4 W per square meter of plant growth, the researchers claim this is more than is generated by fermenting biomass. They also say that future systems could generate as much as 3.2 W per square meter, which would allow a roof measuring 100 m2 to supply electricity to a house with an average consumption of 2,800 kWh a year.

The researchers think such green energy-producing roofs could become a reality in the next few years, with larger-scale electricity production in marshlands around the world following after 2015. The technology works with various types of plants, including grasses such as common cordgrass, and rice, and produces a low-voltage direct current, which can be directly used to charge batteries and power LEDs.

However, the researchers admit the technology still needs improvement in terms of sustainability and in finding ways to limit the amount of material used by the electrodes. Despite these hurdles, they claim the Plant-Microbial Fuel Cell already rivals the economic viability of solar panels in remote areas.

Helder and David Strik, who carried out the first tests of the system, have established a spin-off company called Plant-e to commercialize the technology and expect to have the first products on the market next year.