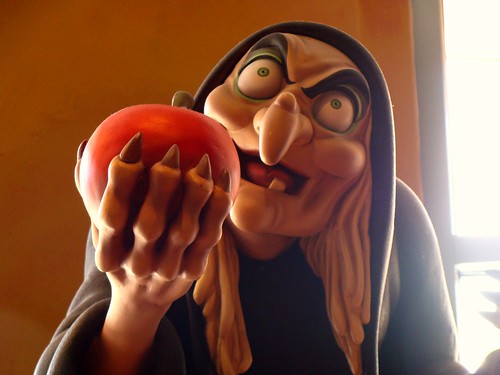 The genetically modified ‘Arctic Apple’ — which is devoid of the compound that turns apples brown and naturally fights off pests — is well on its way to being approved for growing and selling in the U.S.

Apples that haven’t been certified organic are already at the top of the Environmental Working Group’s Dirty Dozen list, for both the volume and stunning array of pesticides consistently found on them.

Thanks to the biotech industry’s relentless quest to control our food, McDonald’s, Burger King and even school cafeterias will soon be able to serve up apples that won’t turn brown when they’re sliced or bitten into. A new, almost entirely untested genetic modification technology, called RNA interference, or double strand RNA (dsRNA), is responsible for this new food miracle. Scientists warn that this genetic manipulation poses health risks, as the manipulated RNA gets into our digestive systems and bloodstreams. The biotech industry claims otherwise.

Of course, like any non-organic apple, the new GMO Arctic® Apple will be drenched in toxic pesticide residues, untested by the U.S. Food & Drug Association (FDA) and likely unlabeled. And of course these shiny new high-tech apples will be cheap, priced considerably lower than a pesticide-free, nutrient-dense, old-fashioned organic apple that turns a little brown after you slice it up.

When the Biotech Industry Organization gathers in Chicago for the 2013 BIO International Convention, BIOTECanada will present its “Gold Leaf Award for Early Stage Agriculture” to Okanagan Specialty Fruits, Inc. (OSF), purveyor of the Arctic® Apple, slated for approval in the U.S. this year. We hate to upset the biotech apple cart, but a pesticide-intensive GMO apple, produced through a risky manipulation of RNA, doesn’t deserve a place on our grocery shelves, much less in the agriculture hall of fame.

That said, the Arctic “Frankenapple” is expected to be approved this year by the U.S. Department of Agriculture (USDA), responsible for protecting agriculture from pests and diseases. It does not require approval by the FDA, which is responsible for human food and animal feed.

Apples, that is, apples that haven’t been certified organic, already are on the list of Should-Be-Forbidden fruits. They reliably top the Environmental Working Group’s Dirty Dozen list, for both the volume and the stunning array of pesticides consistently found on them. According to the Pesticide Action Network’s analysis of the most recent USDA data, apples tested positive for 42 pesticides, including organophosphate and pyrethroid pesticides. Both are endocrine disruptors, both have suspected neurological effects, and both are considered especially toxic for children. (Organophosphates are the basis for nerve gases used in chemical warfare, and have been linked to the development of ADHD in kids.)

Given the grim report card of non-organic apples, some might say it really doesn’t make any difference if we start tinkering with the apple’s genes and RNA. After all, unlike the case with GMO corn or salmon, scientists aren’t injecting pesticides or genes from foreign plants or animals into the genes of apples to create the Frankenapple. While most existing genetically engineered plants are designed to make new proteins, the Arctic Apple is engineered to produce a form of genetic information called double-stranded RNA (dsRNA). The new dsRNA alters the way genes are expressed. The result, in the Arctic Apple’s case, is a new double strand of RNA that genetically “silences” the apple’s ability to produce polyphenol oxidase, an enzyme that causes the apple to turn brown when it’s exposed to oxygen.

Harmless? The biotech industry, OSF and some scientists say yes. But others, including Professor Jack Heinemann (University of Canterbury, New Zealand), Sarah Agapito-Tenfen (from Santa Catarina University in Brazil) and Judy Carman (Flinders University in South Australia), say that dsRNA manipulation is untested, and therefore inherently risky. Given that the dsRNA from our food, and presumably the Frankenapple, will enter the bloodstream and cells of consumers, safety research should be done BEFORE this GMO apple is put on the grocery shelf to prove that the dsRNA that enters consumers’ bodies will not harm them. To date, no such research has been reported, so the Frankenapple is flying in the dark.

On the contrary, recent research has shown that dsRNAs can transfer from plants to humans and other animals through food. The biotech industry has always claimed that genetically engineered DNA or RNA is destroyed by human digestion, eliminating the danger of these mutant organisms damaging human genes or human health. But many biotech scientists say otherwise. They point to evidence that the dsRNA present in food survive digestion in the stomach and intestines and actually enter the bloodstream and tissues of the body, where it can influence the functioning of the eater’s cells.

There are indirect health consequences, too. Turns out the chemical compound that is shut off in the engineered fruit through RNA manipulation, in order to make it not oxidize or brown, is a chemical compound that also fights off plant pests. What happens when the apple’s ability to fend off insects is compromised? Growers will need to spray greater amounts, of possibly even more toxic pesticides, on a crop already saturated with at least 42 types of pesticides. Those pesticides will eventually find their way into our bodies, either because we ingested the fruit, or breathed the air or drank the water where the pesticides were sprayed.

So what’s the trade-off? Non-organic apple growers will prosper as more moms buy more apples for more kids who will, the industry alleges, be healthier for it. It makes for a good public relations story, but no matter how you wrap it up or slice it, taking apples that are already saturated in pesticides, and genetically engineering them for purely cosmetic purposes, does not a healthy snack make.

The pro- and anti-GMO movements will debate whether or not the GMO apple is safe for human consumption. The fact is, we’ll never know until they are properly labeled and safety-tested. As with every other GMO food ingredient or product sold in the U.S., the Arctic Apple will undergo no independent safety testing by the FDA or the USDA. Instead, the USDA will rely on OSF’s word that the apple is safe for human consumption. And without any state or federal mandatory GMO labeling laws in place, OSF will not be required to label its Frankenapple, meaning that consumers or children harmed by the dsRNA modified apple will have great difficulty identifying the mutant RNA that harmed them.

The controversy and debate surrounding dsRNA and the Arctic Apple has just begun. But there is no longer any debate about the dangers that pesticides and pesticide residues on non-organic apples pose to humans, whether we directly ingest these toxic residues by eating an apple, or whether we’re exposed to them through contaminated air and groundwater as a result of acres of orchards being sprayed to control increasingly resistant insects and diseases.

What about the argument that a kid eating a few slices of apples can’t consume enough of any one of these pesticides to cause any real risk to their health? Debunked. Recent studies reveal that during apple season, kids exhibit spikes in the level of pesticides found in their urine, spikes that exceed the U.S. government’s “safe levels.” Kids who live in apple-growing regions show even higher spikes. And those 42 varieties of pesticides? The government establishes “safe levels” for each one – but it doesn’t test for the potential effect of ingesting 42 different pesticides, all chemically interacting with each other, and ingested all at once. And there is good evidence that these interactions often potentiate harmful effects.

From Biodiversity to Monoculture

How did we get to the point where it takes 42 pesticides to keep an apple crop healthy? Michael Pollan best explains it in his book Botany of Desire. Turns out that apples have an extreme tendency toward something called heterozygosity, which means genetic variability. This trait accounts for how, left to its own devices, the apple can “make itself at home in places as different from one another as New England and New Zealand, Kazakhstan and California.” Pollan writes: “Wherever the apple tree goes, its offspring propose so many different variations on what it means to be an apple – at least five per apple, several thousand per tree – that a couple of these novelties are almost bound to have whatever qualities it takes to prosper in the tree’s adopted home.”

Today, you’d have to visit the apple orchard museum in Geneva, New York, to find all the varieties of apples that used to thrive in the wild. Over time, in our quest to control the taste, texture and appearance of apples, we’ve eliminated all but a relative few varieties. We’ve gone too far, says Pollan. By relying on too few genes for too long, the apple has lost its ability to get along on its own, outdoors.

Enter the agro-chemical companies. According to the National Agricultural Statistics Service (NASS) Agricultural Chemical Use Program, apple growers in states surveyed in 2011 applied carbaryl to 46 percent of their acreage, at an average rate of 1.566 pounds per acre for the crop year; chlorantraniliprole to 45 percent; and chlorpyrifos to 44 percent. Apple growers applied glyphosate isopropylamine salt (trade name RoundUp, the same herbicide used on 75 percent of all GMOs and shown to cause birth defects) to 25 percent of acres at an average of 1.604 pounds per acre for the crop year. And that’s just the tip of the iceberg.

The Arctic Apple has been in development for over a decade, the company says. OSF submitted a petition for deregulation to the USDA in May 2010. The USDA, which must hold two public comment periods, concluded the first on Sept. 11, 2011. It’s expected to open the second public comment period this spring or summer, and OSF hopes the GMO apple will be approved for growing and selling in the U.S. this year.