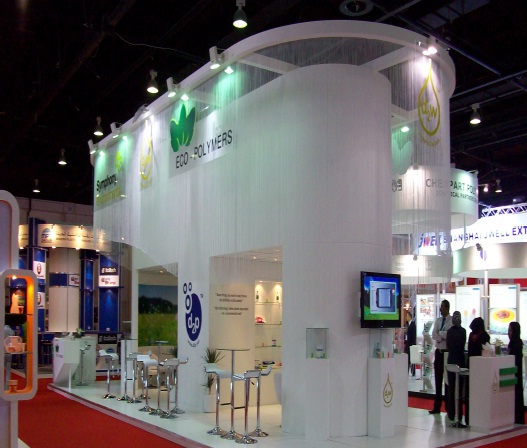 In January 2011, Symphony Environmental Technologies PLC and Eco-Polymers exhibited at the 10th Arab International Plastics & Rubber Industry Trade Show & Conference in Dubai, UAE. There was worldwide interest in Symphony’s d2w Oxo-biodegradable technology, which turns ordinary plastic at the end of its useful life into a material with a completely different molecular structure. At that stage it is no longer a plastic and has become a material, which can be bio-asssimilated in the open environment in the same way as a leaf. The use of Oxo-b­iodegradable plastic technology is now compulsory in the UAE.

The two companies together also successfully launched two new products – ‘d2p’ a range of antimicrobial and fungicidal plastic additives, and the ‘d2Detector’, an anti-counterfeiting and quality control unit. This unit is a “must have” for anyone concerned about counterfeiting of their products, who need to know that it is wrapped in their own sealed wrapper. For more information visit www.d2w.net

Symphony had its best stand so far – at this its 3rd visit at the ARABPLAST show. The stand was not only impressive, but it also had an excellent position, next to the world’s largest polymer producers. The show was a great success and Symphony is very pleased with the several hundred enquiries it had from all over the Middle East, Europe and Asia. Being a Government-authorised Oxo-biodegradable
additive-supplier in the UAE, Symphony’s stand attracted Ministers from several countries.

Michael Laurier, Symphony’s CEO said “We were honoured to receive and demonstrate the ‘d2Detector’ to the Minister of Environment and Water for the UAE, Dr. Rashid Ahmed Bin Fahad who expressed great interest in our product. We had a very successful workshop which was attended by many of our Distributors, as well as government officials”.

Symphony and Eco-Polymers used this opportunity to test many products with the new ‘d2Detector’ and found that there was either no additive being used at all, or not enough. Due to these discoveries, Symphony will shortly be launching a free service for d2w users to have their products checked on a regular basis. For a video of d2w oxo-bioplastic film degrading, go to:http://www.youtube.com/watch?v=i3TGqcpWJTM

Symphony is the only public company specialising in oxo-biodegradable plastics. It has a diverse and growing customer-base and has established itself as a global business, serving 92 countries through 59 Distributors. It is investing heavily in R&D and is continuing to develop innovative technology. Symphony is a member of the Oxo-biodegradable Plastics Association (www.biodeg.org), the Society for the Chemical Industry (UK), and the American Standards organisation (ASTM). Symphony is also a member of the British Plastics Federation, the European Organisation for Packaging & the Environment (EUROPEN), and the British Brands Group. Symphony actively participates in the work of the British Standards Institute (BSI), the European Standards Organisation (CEN), and the International Standards Organisation (ISO).